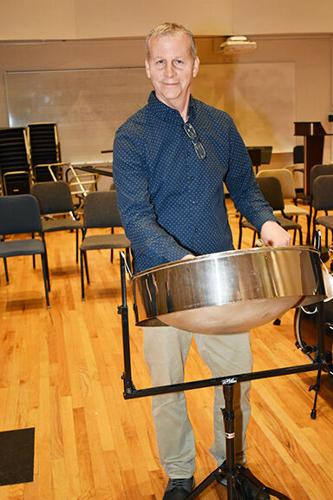 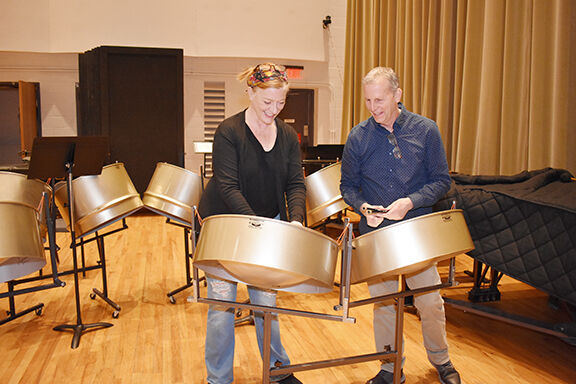 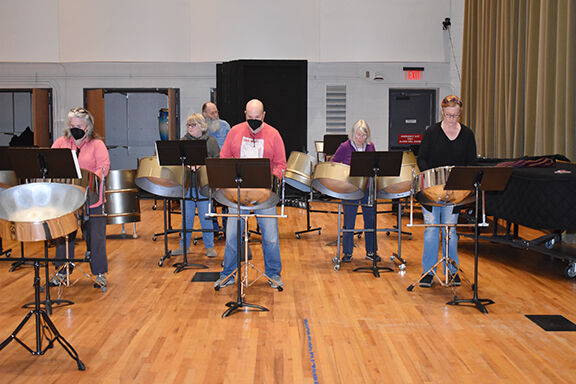 Britain is an adjunct instructor in music for steel drums at Blair School of Music, where he has taught since 2004.

“There are numerous things I like about playing steel drums, but if I had to choose one it would be the sound of the instrument, especially when it is a full steel band,” said Britain. “Obviously, the sound evokes all things 'beachy,' but beyond that, I have always found the sound to be joyful, captivating and energetic."

In addition, the public can take lessons from him at Osher Lifelong Learning Institute at Vanderbilt, where he oversees the Osher Steel Band. Britain is the director of the Vanderbilt University Steel Band Program, which comprises college and community steel band students.

“I teach six back-to-back steel band classes on Sundays and I always leave feeling energized, and though my ears may be a bit fatigued, I’m never tired of the sound after a long day of teaching," Britain said. “I enjoy teaching this instrument because the steel drum is such an inclusive instrument, especially for people with little or no musical background. Once the proper grip and stroke and an acceptable sound are established, a brand-new class of beginners is off and running."

“We are always playing a simple chord progression within the first 10 to 15 minutes of our first class. It is always a real joy to see students’ faces, as the sound they are making emanates from the steel drums. It’s especially gratifying when it’s their first time making music in a band setting.

“I also really enjoy composing, arranging, and teaching music for the different levels of classes; beginning, intermediate, and advanced. The steel drum (steel pan is the preferred name in Trinidad), can successfully tackle about any musical genre and I like experimenting with this,” Britain said.

“The classes are always required to do a song from the birthplace of the instrument, Trinidad and Tobago, but beyond that we have done everything from Bulgarian and Taiwanese folk songs to jazz, classical, and video game music, and we’ve even learned the entire six-minute version of Queen’s ‘Bohemian Rhapsody!’

He can be heard on everything from movie soundtracks and commercials to hits by country stars, and he was the first percussionist to grace the stage of the Grand Ole Opry with Latin percussion instruments, congas, bongos, and timbales.

Steel pans originated in the tropical islands of Trinidad and Tobago. The modern pan is a chromatically pitched percussion instrument made from a 55-gallon industrial drum. The instrument was developed in the early-to-mid 1900s, with roots going back much earlier, including the talking drums of West African cultures.

Britain discovered steel pan as a student at Wichita State University in one of the country’s first university-based steel bands and followed his love of pan from the plains of Kansas to the tropical island of Trinidad.

Britain played steel pan solos on several popular tracks for country mega-star Kenny Chesney including “When The Sun Goes Down” and “Shift Work,” as well as on his albums Just Who I Am, Poets & Pirates, Be As You Are (Songs from an Old Blue Chair), and The Road & the Radio.

He has also recorded and shared the stage with numerous Nashville luminaries, including Lee Greenwood, Neal McCoy, Charley Pride, Louise Mandrell, and the Warren Brothers.

Just a few of the jingles and television shows Britain has performed for include: “Live with Regis & Kelly,” “Tony Roma’s” restaurant, “Adventure Island Water Park,” “As The World Turns,” and “Lifestyles Of The Rich & Famous.”

Britain has traveled many times to Trinidad to perform with the Amoco/BP Renegades Steel Band at the prestigious Panorama Festival.

As a steel pan performer, Britain leads his band Deep Grooves, and for the last 30-plus years he has worked with marimbist Dan Moore as half of the Britain Moore Duo (BMD).

The marimba is a musical instrument in the percussion family that consists of wooden bars that are struck by mallets, making it a wonderful instrument to pair with the melodious steel drums.

The first touring pan and marimba duo, the BMD has recorded four albums and continues to perform throughout the U.S. and abroad.

He has taught at the Taipei International Summer Percussion Camp in Taiwan, The Birch Creek Music Performance Center in Wisconsin, and for the last 20 years at the University of Iowa Percussion Immersion Week.

“It’s really fun to broaden the band and audience members’ perspective on what this great instrument is capable of," Britain said. "I know I’m doing my job as a composer and arranger when an audience member comes up to me after a concert and says, ‘I didn’t know a steel drum could do that!’

“I’ve been lucky enough to teach all ages and skill levels, from K-12 students, football players (‘First & Ten Steel Band’ can be seen on YouTube), college students, special needs, and I’m especially grateful for the Osher Lifelong Learning Institute steel bands, which continue to grow and improve by leaps and bounds.

“Our end-of-the-semester concerts are always a great culmination to our hard work when we get to present our music to family and friends. Whether it’s their first concert or they are seasoned performers, it is always a thrill for me as a teacher to see and feel the pride radiating from the band members after a great performance. It’s very, very rewarding."

For more information about classes in steel drumming, visit vanderbilt.edu or call 615-585-4786.